WSJT-X offers a handy UDP network service for two way communication with other applications such as logging or monitoring software, but I had some difficulties using it with multiple applications at the same time.

WJST-X is set up to communicate with a listening UDP server in the Settings->Reporting section as the image below, by default it is set up to send packets to the localhost port 2237.

There are a number of software packages in Linux that support this communication from WSJT-X such as CQRLOG and AlarmeJT.

CQRLOG uses it in remote mode to allow automatic logging of QSOs from WSJT-X saving a lot of time and errors.

AlarmeJT, pictured below, is a handy application that takes decodes and displays them alongside information such as whether the DXCC/Locator is required based on logs provided to it and can communicate in response to WSJT-X to tune to the selected call. 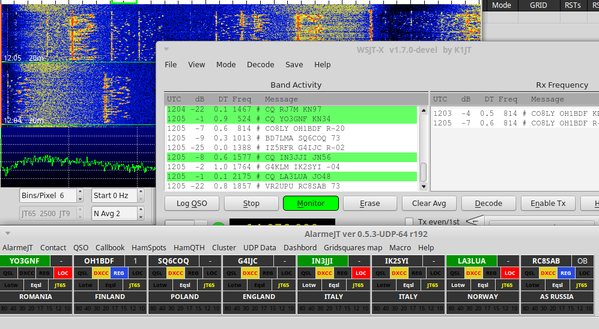 The only problem is by default, as far as I understand, we can only use one of these programs at a time with WSJT-X. WSJT-X sends its UDP traffic to one address/port but each of the two consuming applications will try to exclusively bind this port preventing the other application from doing the same.

WSJT-X can be configured to send to multicast addresses to allow multiple applications on the network to consume the same data. However I’m running both applications on the same workstation and one of the applications doesn’t allow the listener IP to be set and the other wouldn’t let me change the settings at all in addition to the binding issues. So the plan was to find some way of duplicating the UDP packets to multiple destinations.

Some Startpage searching before attempting to do this with iptables or Python (a quick test indicated it would be possible) identified an already written user-space tool, samplicator, that does the forwarding we need here. It is easy to compile and use.

The idea is to have WSJT-X configured to send to the samplicator listener on local port 2000 and have it send copies of the received packets to a CQRLOG listener on port 2238 and also to an AlarmeJT listener on the default port 2237.

The command to implement this is as below and I’ve put it in my /etc/rc.local to run at boot.

Here we are listening on port 2000 and forwarding copies of the UDP packets to 127.0.0.1 port 2237 and 2238. The -S options is especially handy as it spoofs the source addresses to appear exactly as sent which allows the consuming applications to communicate in response such as to allow tuning to a station when clicking on a CQ in AlarmeJT, without this set they can just consume the data.

It seems to work well with the limited traffic we’re using here and lets me parse decodes quickly for their statistics, tune quickly to calls and to log the successful QSO automatically. Now I just need to make a few hundred contacts to make up for the time spent fiddling about with this stuff to save time…